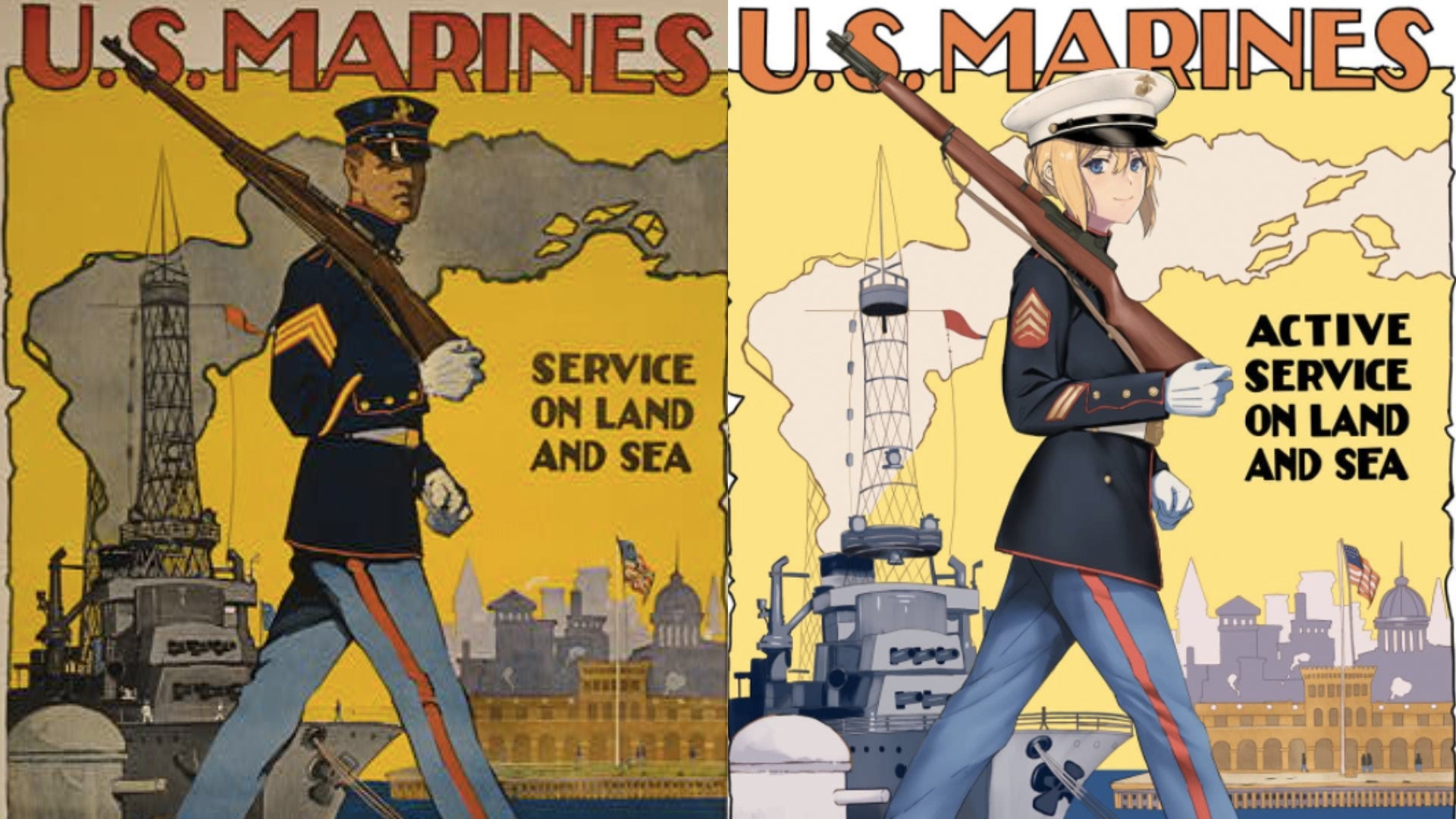 A US Marine’s anime-style recruiting posters have gone viral

When many people think “Marine,” they might picture a square-jawed, buff guy who looks like he’s eating ammo belts (and pencils) for breakfast. This stereotype may be why a new Marine Corps recruiting poster of a smiling anime girl in dress blues is going viral on social media.

“Damn they know their clientele,” wrote a commenter on the popular Air Force amn/nco/snco Facebook page, where the image was shared on Tuesday, as well as on Reddit, Twitter and the Anime Hunch news site.

“Is it too late to join the Marines?” writes another.

The image puts a modern twist on a 105-year-old poster titled ‘US Marine Corps – Service on Land and Sea’. According to the Library of Congress, the poster was illustrated in 1917 by artist Sidney Riesenberg. More than a century later, Master Sgt. Arthur Chou had the idea to make his own mark on classic recruiting posters while sitting in the Marine Corps recruiting school. A lifelong anime fan, Chou wanted to combine his passion for the medium with his new career.

“I was like, ‘I want to put something on my walls when I get to recruiting,'” Chou told Task & Purpose.

“Service on land” is the fourth anime-style Marine recruitment poster that Chou has commissioned. He contacts artists through the freelance business website Fiverr, shares his ideas with them, and then lets them get to work. It all started with “Ready,” inspired by a 1942 poster of a standing Marine resting from parade.

“I see the old ‘Ready’ sign everywhere,” Chou said. “What if I just did it with a pretty anime girl?”

“Ready” was followed by a poster for the Marine Corps Band with more animated girls in blue dresses and the words “Play with honor” in bold on it. This was followed by “Over the top”, another modern take on a WWI poster showing an anime girl in fatigues, body armor and a rifle with her hair flowing under her helmet.

“I don’t know if any of the hairstyles are in order,” Chou said, though he added that his explanation for the girl’s flowing hair in “Over the top” was that her rubber band had fallen off.

The four posters are just one element of a collage of anime props framing Chou’s desk. There are decks from the Yu-Gi-Oh! card game, a small statue of Yamato, the human avatar of the eponymous WWII battleship from the Kantai Collection game, and a plush doll of Snubbull, a pink Pokemon resembling a bulldog. . Snubbull wears a camouflage patrol cap on Chou’s desk, which works well since the Marine Corps mascot is a bulldog named Chesty. It’s rare that a potential recruit walks in and doesn’t log on to something in Chou’s office.

“Literally everyone who walks in and sees my corner is like ‘oh, that’s cool,'” the Marine said.

Chou clearly has a knack for connecting with new recruits, called “poolies” in Marine parlance: her Instagram page is filled with images of budding young Marines posing with Snubbull, or like characters from the anime JoJo’s Bizarre Adventure. , or with the Yu-Gi-Oh! cards on his desk. Chou even prints copies of the posters and gives them to the poolees as rewards for graduating from boot camp.

But it’s not just the future Marines who dig the anime setting, it’s the superiors as well. Chou said a colonel and an artillery master sergeant are among those who bought copies of some of his posters. The payment only covers the cost of printing the posters, said Chou, who clarified that he does not make money from the requests. The interest of so many people shows how much more mainstream “geek culture” has become than it used to be.

“Now, geek culture is a huge thing,” Chou said. Now, an animated girl who many observers say looks like Violet Evergarden from the eponymous series is garnering as much attention as the Marine Corps monster-slaying swordsman commercial of the 1990s. She may not look like the Navy in many people’s imaginations, but it’s what’s inside that counts.

“The only reason I made these posters was to break the stereotype,” Chou said. “People think we’re all crazy and nuts, but we’re people too. All the best Marines I know, they’re not even tall, they just have a lot of heart. They’re just trying to get better.

What’s hot on Task and objective

Want to write for Task & Purpose? Click here. Or check out the latest stories at our homepage.