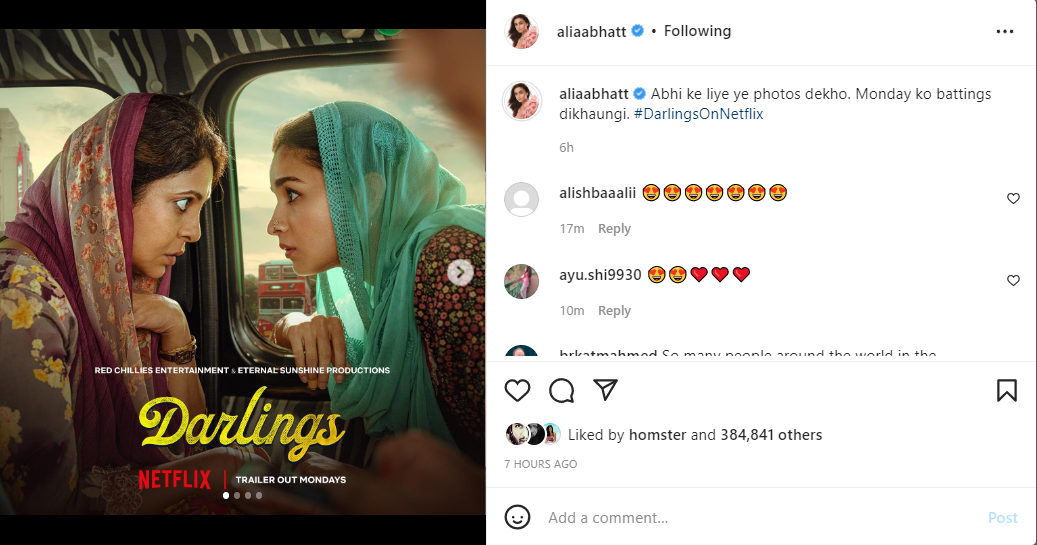 In the first poster, the ‘Highway’ actor can be seen giving his on-screen mother, Shefali Shah, a weird look. Both actors wore Indian salwar-kameez and could be seen seated inside a car.

In another poster, Alia can be seen giving her on-screen husband Vijay Varma another weird look as he holds her hand.

In the third poster, the ‘Super 30’ actor could be seen chatting with actor Roshan Mathew while his hand was tied up with rope.

In the fourth poster, on-screen mother-daughter duo Alia and Shefali give Vijay a mysterious look as he can be seen tied up with a rope and a piece of cloth in his mouth.

The makers of the film are all set to unveil the trailer for their dark comedy flick on July 25, 2022.

Directed by Jasmeet K Reen, “Darlings” is billed as a “dark comedy-drama that explores the lives of a mother-daughter duo trying to find their place in Mumbai, searching for courage and love in exceptional circumstances while struggling against all odds.”

Produced by Gauri Khan, Alia Bhatt and Gaurav Verma, “Darlings” will be released on Netflix on August 5, 2022.

Excited about the film’s digital release, Alia said, “Darlings holds a very special place in my heart, it’s also my first film as a producer with Red Chillies. We are very proud and happy with how the film has come together and hope it entertains and engages audiences around the world. (ANI)

This report is generated automatically from the ANI news service. ThePrint declines all responsibility for its content.