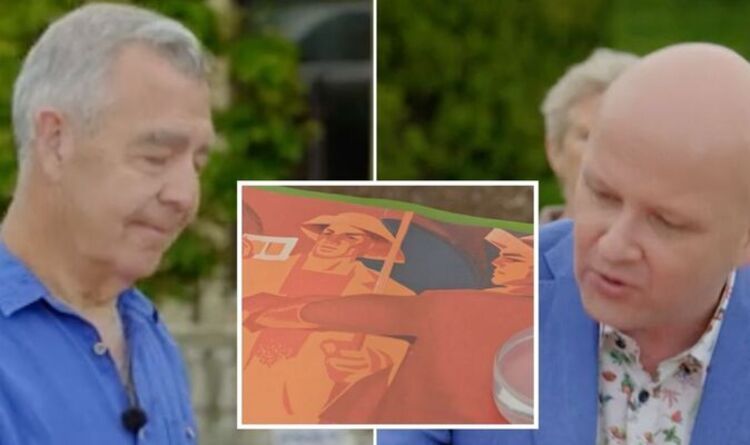 On a recent episode of Antiques Roadshow, Fiona Bruce and her team were at Dyffryn Gardens near Cardiff, where the treasures included a necklace made from some of the largest pieces of Baltic amber seen by the specialist John Benjamin jewelry. As the BBC host explored the history of Nantgarw porcelain, TV expert Chris Yeo was left in awe after a guest brought in a collection of ‘propaganda’ posters from the Soviet Union dating from the 1970s.

“What we are looking at is a Soviet Union propaganda poster.”

“[And] what i would like to know is how do they get from communist russia to south wales? ” He asked.

The guest replied, “I was a student in Minsk in 1974 and I wanted to impress people when I came back with something to put on my walls… to show how the other half lived.

The specialist wondered, “So may I ask, where did you find these posters?”

“In a bookstore in Minsk,” the owner continues: “There weren’t many stores, there was only one store that sold them.

“So we would go there every week and see the new posters.”

The BBC host asked his guest about the price he paid for his collection of ‘psychedelic’ Russian posters.

The guest revealed, “10 kopecks, which would have been a few pence.”

“Posters were used to convey the communist message in order to rally people, [to] sell the idea of ​​communism.

“These wonderful images with bright colors and strong graphics, simple slogans that stop you in your tracks and are what people love about them,” he exclaimed.

The guest was asked to translate a slogan written in Russian in the corner of the work.

The expert informed viewers: “[It’s] very, very typical, this idea that he is falling behind in promoting collective effort.

On the other posters, Chris remarked on the use of characters that had been selected for the cover art, including a nurse, an astronaut, a musician, and a railroad worker with “high cheekbones and a chiseled jawline”.

Regarding the valuation, Chris told his guest: “So you were paying less than 10p in 1970 for these posters, I think things have evolved since then.”

While it was unclear whether the guest planned to sell his Russian collection, the historian thanked the owner for bringing them to the show.

Antiques Roadshow episodes can now be streamed on BBC iPlayer.