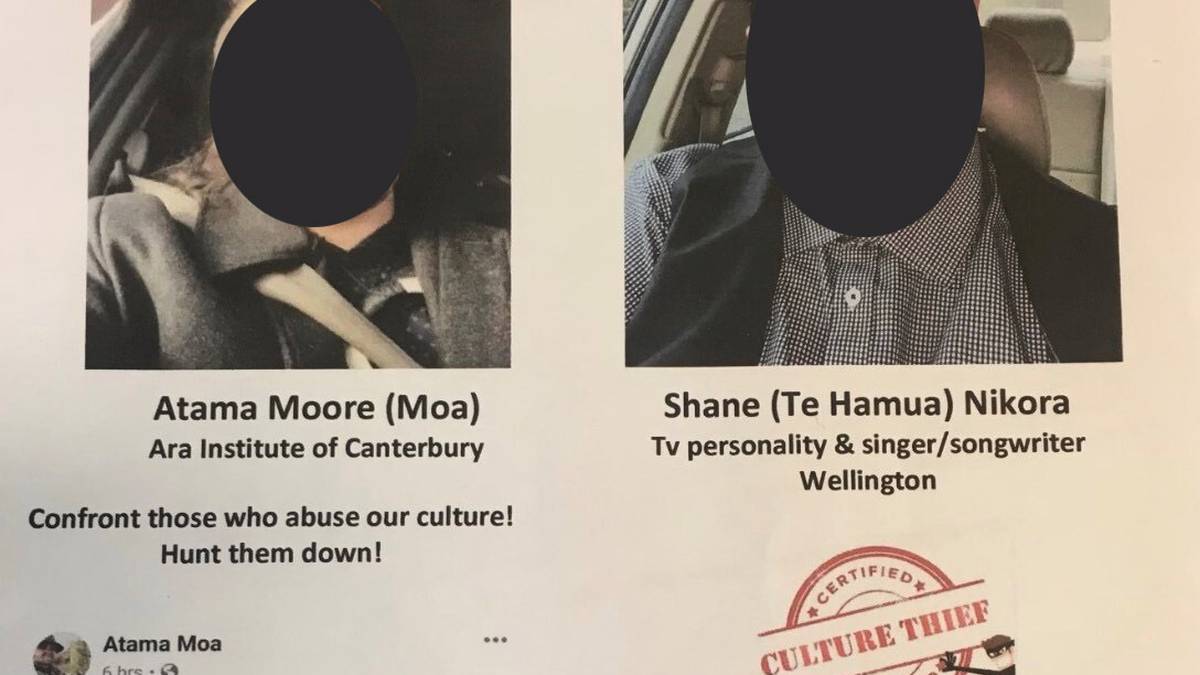 Men whose identities have been falsely used to spread a politically charged message. Their faces have been masked for this story. Photo/Nelson Weekly.

A couple who mistakenly used the identities of two Maori to make it look like they were delivering a politically charged message are fighting to keep their names secret.

In a lengthy sentencing today, the couple’s efforts to seek a release without conviction and continued name removal failed, but they immediately appealed against the lifting of the removal order.

The pair were originally charged last May with obstructing the course of justice and have since admitted an alternative charge each of providing false documents. The charges related to leaflets the couple had made and distributed to businesses in Nelson, which included threats that people would be ‘hunted’ for appropriating Maori culture.

The leaflets featured the faces of Maori scholar Atama Moore (Moa) and television personality and exponent of Maori tikanga and kapa haka, known then as Shane Te Hāmua Wilkins-Nikora. They also featured comments from the Facebook group Our Culture Is Not Your Pay Check! (sic) which highlighted the “alarming number of non-Maori and non-Aotearoa businesses abusing and disrespecting such things as haka, kupu Māori, moko, kowhaiwhai, whakairo and tukutuku designs”.

But none of the men featured knew anything about it, nor did they live in Nelson where the material was distributed in November 2020.

The couple responsible for distributing the leaflets were arrested after police identified their car in CCTV footage. Dressed in wigs and hats, they walked around at night, delivering the flyers to businesses and organizations in central Nelson.

This led to a search of their home where a stack of documents were found, including material relevant to the comments used on the leaflet. The woman initially denied responsibility and blamed the two men pictured, but eventually admitted what she had done and ‘enjoyed’ driving by delivering what were thought to be 18-20 flyers, although the exact number is not known.

In Nelson District Court today, their lawyer Michael Vesty argued that their actions were in response to the threats and intimidation they were subjected to, and that their safety was at risk if their names were to be published .

Crown Prosecutor Jeremy Cameron and Judge Jo Rielly both said the couple had not met the thresholds for which a release without conviction would apply, or the reasons why the crackdown would continue.

Judge Rielly sentenced the couple, but without further sentence to reflect the hardships they had already endured, including raiding their home and business under the auspices of hate speech, facing a criminal charge and the breakdown of their relationship.

Te Hāmua Wilkins-Nikora said on video in a pre-recorded victim statement played in court that he was “rather surprised” to be called a victim when asked to give the statement.

“If I am the victim, I should be the one whose name is removed. I don’t see why a few people in Pakeha who have admitted to doing this are able to keep their name hidden when it was my name that was used. to commit this fraud.”

Moore’s statement was filed but was not read out in court.

Vesty said his clients’ actions were prompted by threats made against them in the course of their work, which was inspired by Maori culture. He said they had been the target of abuse and threats, including up to today’s sentencing, when comments were made on social media ahead of the lifting of the name suppression .

“It’s a very hot political potato that we’re dealing with today,” he said, adding that they were seeking to permanently remove their name for their own protection.

Vesty said one post in particular, which said the person’s remedy for dealing with “culture thieves” was to “smash them,” revealed just how much danger his customers could be in.

Cameron said the court was essentially dealing with a “basic fraud case”, which had a significant impact on the two main victims. He considered the offense committed in a “very public manner” to be of moderate seriousness, while Judge Rielly said it was concerning and moderately serious.

“You were happy to put two men in the spotlight and cast suspicion on their villainous role,” Judge Rielly said at sentencing.

Cameron said a conviction and release was the appropriate response, but permanent name deletion should not be granted.

Judge Rielly, who removed her face mask in preparation for a nearly hour-long sentence against a ‘unique set of facts’, said the offense – which was ‘bold, but hidden’, carried a sentence maximum of three years in prison.

She also acknowledged that some of the threats the couple had been exposed to were “extremely concerning and disturbing”, but understood that they were not from the two men featured in the flyers.

Judge Rielly understood the harm the abusers had suffered at the hands of ‘online bullies’, who they said led to their actions, but that they had ‘lost sight’ of police efforts to support them .

She agreed that the subject of cultural appropriation was a “hot potato”, which each had experienced intimately, but their actions in November 2020 were designed to create fear and division. They had also struck fear and alarm among those who had received the material, some of whom said they felt either shocked, frightened, targeted, nervous, insulted, offended and sickened.

The couple expressed regret for the harm caused to those who received the flyers.

Judge Rielly said the two men featured in the flyers felt they had been stripped of their cultural identity, their whakapapa had been compromised and they had been deformed.

“They have every right to be upset.”

Judge Rielly said that while the two men in court admitted wrongdoing, they lacked remorse and an understanding of the impact of their offending, as evidenced by their efforts to be treated leniently by the court.

She said while refusing to have the name removed that the couple suffered “significant effects” from their actions, including the loss of their livelihoods.

The temporary deletion of the name now applies, pending the outcome of the appeal process.