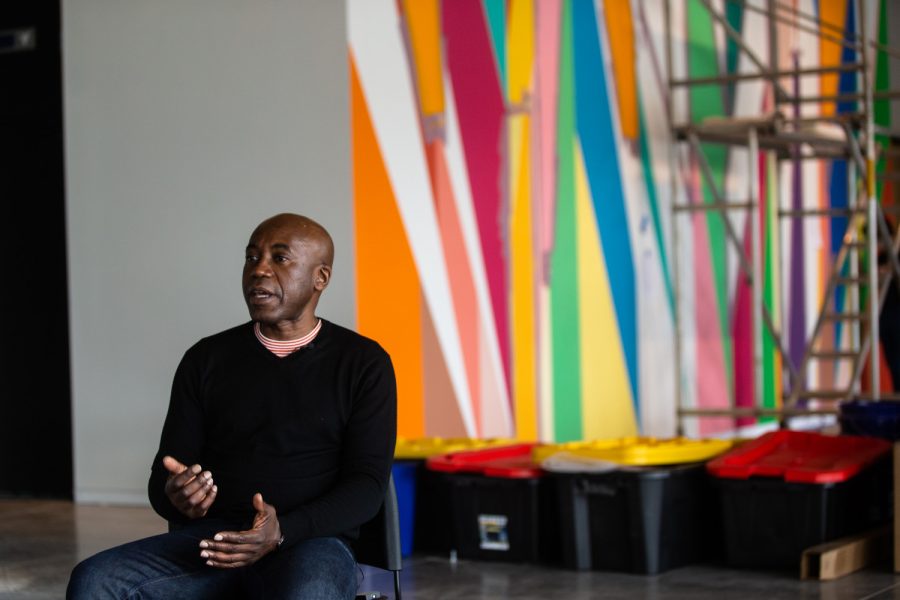 Creation of the Stanley Museum’s first work of art

A criss-crossing kaleidoscope of colorful angular lines stretches from floor to ceiling on a wall in the lobby of the new Stanley Museum of Art.

The non-figurative mural is the first artwork installed in the newly constructed building, and the artist behind it, Odili Donald Odita, has his own abstract ties to the University of Iowa.

Odita was born in Nigeria in 1966. Soon after, her parents fled the country due to the Nigerian Civil War and immigrated to the United States – where they first moved to Iowa. Odita’s father studied design and printmaking at UI, while her mother studied social research. Later, the family moved to Columbus, OH, where they remained for the rest of Odita’s childhood.

RELATED: A first look inside the new building of the UI Stanley Museum of Art

The young artist lived for a few years in Iowa City and did not return until years later when he was contacted by the Stanley Museum of Art to design and paint a mural in its future lobby.

His mural, titled Surroundingsis meant to reflect one of the most famous pieces of the UI’s 17,000-piece art collection – Jackson Pollock’s 1943 masterpiece, Wallconsidered one of the artist’s most significant works which marked a transition from figurative art to the fully abstract “splatter” style for which he is known.

Pollock’s painting will be featured as part of the new museum’s inaugural exhibition, presented in one of the second-floor galleries in time for the building’s inauguration on August 26.

When Odita saw Wall in person and in color for the first time after years of looking at Pollock’s work only through black and white photos in art books, his view of painting has changed dramatically.

Odita originally seen Wall as a “problematic” work by Pollock, citing the enormous piece’s intense design and its apparent lack of balance – however, after viewing it in color the artist said it “completely makes sense “.

“I understood how he used color in opposition to drawing, the intensity of yellows and whites to complete the structure of the drawing,” Odita said. “It just made sense in terms of the balance, it was really impressive.”

Odita’s work will be the first in a series of artworks on display in the lobby, which the museum has titled “Thresholds.” Due to the sunlight that is expected to filter through the hall’s large windows, this will only be a temporary exhibit to prevent the sun from damaging its vibrant colors.

It should stay in place for a few years before being repainted.

When taking on larger projects and murals or murals, Odita said he considers the space in which the mural exists to be just as important as the room itself. He considers how his body can feel existing in the same space and time as art.

“Whatever the space, and wherever it is, it’s definitely a big factor in the job and part of the job,” Odita said.

RELATED: Photos: Tour of the Stanley Museum of Art

Although the style for which he became best known was decidedly abstract, Odita’s work did not always take on the often angular and prismatic patterns seen in Surroundings. Growing up, the artist was largely inspired by comic books and the paintings and artwork his family had around the house.

Her Nigerian heritage also greatly influences her interest in art, Odita said. He describes his childhood as a childhood surrounded by art and art history – his father fostered much of the material that got Odita started, including African artwork, various prints and books. art on subjects like the Renaissance or Picasso.

Odita said he always knew he wanted to do something with art and was previously interested in things like photography, illustration and graphic design. Ultimately, however, he said he didn’t have enough patience for these approaches and simply preferred a larger scale – although he has respect for artists who “gather the diligence” for this type. of mediums.

The painter’s true “involution” toward abstraction, as Odita describes it, occurred during his undergraduate years at Ohio State University, when a classmate told him to find his own style.

“There was someone whose work I admired at school, and you learn by copying, so I was always taking work he was doing – one day he came up to me and said ‘Hey man, you copy my style, you have to find your own thing,” Odita said. “It was very hurtful in a way, but it was very helpful because it just forced me to think my own way, and from there I slowly evolved into an abstractionist.”

Odita has taught at various institutions for nearly 20 years and has lived in Philadelphia since 2006. Odita currently works as an Associate Professor of Painting at Temple University’s Tyler School of Art, although he is currently on unpaid leave while taking projects personal.

Although he has only visited IU a few times to visit faculty members or speak at conferences as a guest artist, Odita said his mural in the Stanley pays homage not only at Pollock, but also at the museum and its space. He noted the consideration of Iowa City’s seasonality during his various visits, creating a piece he hopes will ultimately give people the joy of seeing.

“I really wanted to do something that was conditional on the environment here, because I’ve been in the city at different times when it’s freezing cold, as much as when it’s sunny this spring and summer,” said Odita. “I hope it stands up to the public and makes people happy to see it.”