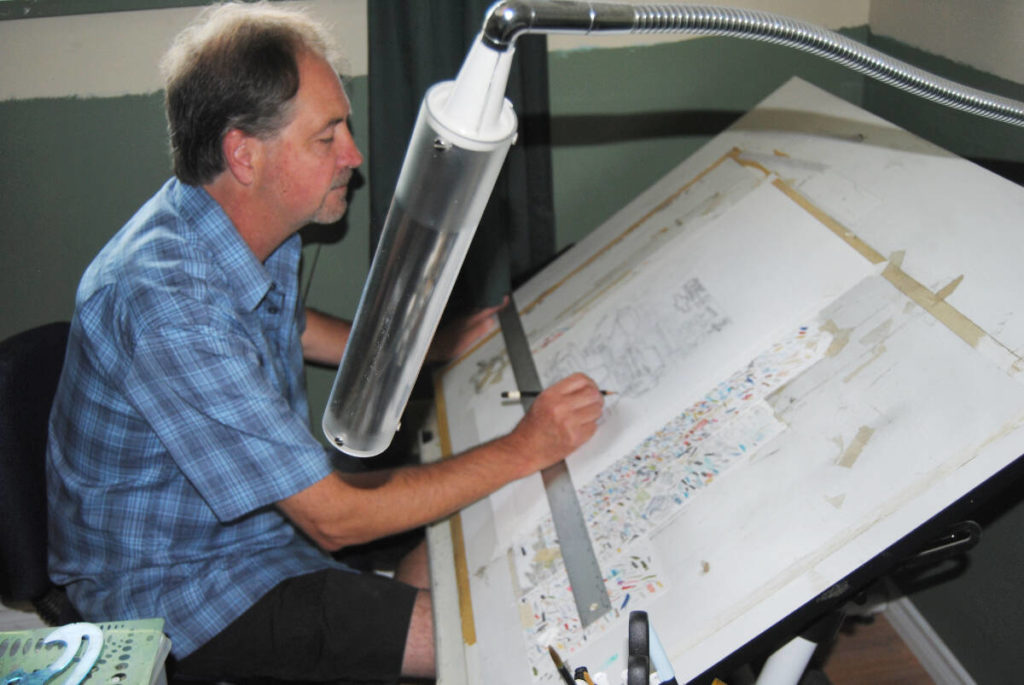 Langley Good Times Cruise-In charity car show is approaching. And ahead of the huge community event to be held in Aldergrove town center on Saturday September 10, the Langley Advance Times has collected a series of stories talking about who was involved and what festivities are planned. Stay tuned here, everyday, for more on the upcoming Cruise-In.

By Frank Bucholtz/Special at Aldergrove Star

This year’s Langley Good Times Cruise-In poster features a classic car outside the former BC Telephone Co. office in Aldergrove – now home to the Aldergrove Museum, run by the Alder Grove Heritage Society.

There couldn’t be more Aldergrove than that.

Since the show moved to Aldergrove from Langley City, the town has embraced it and the Cruise-In volunteers really appreciate that warm welcome.

Artist Blair Howatt, a Walnut Grove resident who has been making Cruise-In posters since 2005, was also well received and decided to give this year’s poster an Aldergrove feel.

Howatt enjoys being part of Cruise-In every year. His posters are collectibles and are also used as the basis for each year’s T-shirt.

RELATED: The Popular Burger Chain Is Literally In and Out of Canada Just for the Langley Auto Show

He’s a car enthusiast who currently puts his efforts into a 1986 GMC Sierra square-box pickup. He’s had many muscle cars in the past, Mustangs, Malibuses, and Monte Carlos, and also has a weak for them.

“I like to buy vehicles in good condition, but there is always something wrong. I want to customize them, and with this truck I added new wheels,” he noted.

“I’m not a mechanic, but I trade my art for mechanical help.”

He is both flattered and amazed by people’s reaction to the posters.

Many ask him to sign them and tell him they have them all.

Cruise-In has been known to draw people in again and again, and this reaction to the posters is a pretty good testament to its continued popularity with auto show visitors.

Howatt has a thriving art business which he operates on the side, as he also has a regular job. His art business has grown and COVID-19 restrictions have helped him even more.

“A lot of it is car-related,” he explained. “I do a lot of caricatures and cartoons, and I have a lot of regular customers.

He almost always has projects in the works, and when The Star spoke to him, he had finally cleared out a backlog of artwork.

“I feel satisfied when I have completed a project. It can be a lot of work and meeting deadlines adds pressure, but it’s fun. »

Cruise-In is very important to him.

“The show has always been close to my heart,” he shared. “I’m friends with a lot of people who are involved in it and I’m a car fanatic. It’s a passion, I guess. I’ve loved cars since I was five or six years old.

READ MORE: Jimmy Shine will be back in person at the Langley Good Times Cruise-In

Blair Howatt, in his studio, worked on another car sketch. He turned his love of cars into Cruise-In art. (Frank Bucholtz/Star Special)