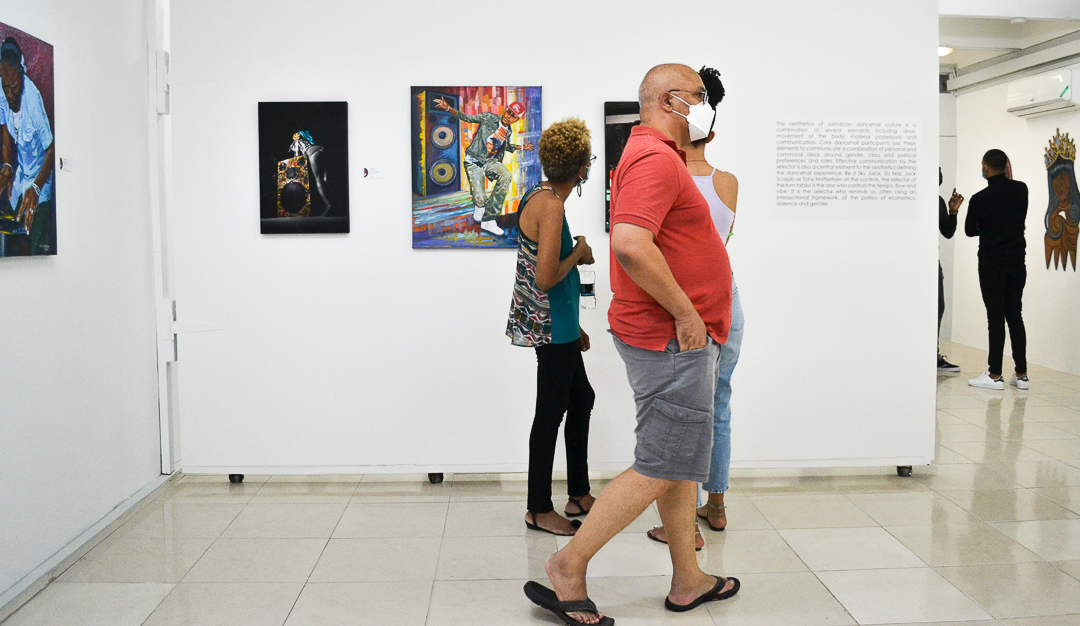 Dancehall culture is more than music. The genre was born in the streets, the corner bars and, of course, the dance halls of Jamaica. With the holidays came the promotional posters – eye-catching sheets of street art stapled to telephone poles, their lively lettering, vibrant colors and playful graphics interwoven into the cityscape. Dancehall art posters are flourishing in new and innovative ways as the next wave of designers explore different facets of the distinctive style.

Jamaican holiday posters derived their popularity, in part, from their accessibility. “It was a way of being there that everyone could afford,” said sign artist Rushane “Bug” Drummond. As these cultural canvases rose to prominence in the 1980s and 1990s, artists like Nurse and Denzil “Sassafras” Naar became two of the most popular designers. Known for their graffiti lettering and use of color, they pioneered their own brand of notoriety. Later, as artists like Vybz Kartel rose to popularity in the 2000s and the dancehall ecosystem continued to evolve, we saw these changes trickle down to graphic marketing.

Drummond, known for his combination of hand-painted artistry and prolific production, is part of this next generation of creators. Coming from a family of artists, he apprenticed with a respected local, Allan Thomas, before going freelance. “It shows a culture. It’s blood, sweat and tears,” Drummond said of the significance of the dancehall art poster tradition.

As we talk via Zoom, I can see his posters stuck to the ceiling behind him like a Sistine Chapel mural, capturing his reverence for the art form and its long history. One reads “Scrub-A-Dub Bus Ride” in seafoam white and blue bubble letters. Another has the word “Flames” in yellow letters dripping down in the form of a flaming splash. The collage tells a collective story of his work over time. “It’s not something that happened overnight,” Drummond said. “Each generation is added to the previous one.”

Multidisciplinary artist Matthew McCarthy revels in the more rebellious side of the style through his signage, murals and installations. Criticizing social issues affecting dancehall and Jamaica as a whole, from inequity to violence, his designs depict complex animated letters spelling out patois phrases and folk idioms.

McCarthy, who grew up among carpenters, was drawn to public and street art by the images of independence that surrounded him. “Jamaica had a culture of street art, and we weren’t just trying to do it like American culture. It was more that locals were trying to find some sort of place in the public space. utility poles, fences and walls, the art had what McCarthy describes as a “DIY punk mentality” inspired by closeness to the ideas of the Rastafarian counter-establishment. He and other artists help push the boundaries of the dancehall culture “There is always a time when individuals have to come out,” he said.

With experimentation, dancehall art began to blend and influence other mediums. As a Jamaica-based graphic artist specializing in modern handwritten designs, Samantha Hay has found herself incorporating dancehall iconography into her work. Although his more minimalist approach focuses primarily on the letters, they never remain still, swirling or vibrating throughout his compositions.

“A lot of people don’t realize that Jamaica has used typography extensively in our designs for many years,” she points out. “Dancehall posters really show typography as a unique form.” Hay eagerly adapts this local pop art, despite its historic marginalization within the Jamaican art community, because for her, nothing captures the spirit of Jamaican ingenuity better than language. As one of his drawings states, you must tun yuh han and mek fashun. “We look at what we have and where a lot of people see a lack, for us that inspires innovation,” she says.

The general public and new media

Jamaican poster art periodically gains mainstream recognition as an art form. In February, some of Hay’s work was shown for the first time in the exhibition “Cyah Stall: Dancehall Aesthetics, Language and Resistance”, co-curated by Winston Campbell and Katrina Coombs. They sought to organize artists who pushed the envelope. “With increased access to computer technology, we’ve seen more people get into design and the aesthetic has changed,” Campbell said, her voice warm with fond memories of the weekly dancehall parties of her youth in West. Kingston.

He notes the influence of outside musical cultures, such as hip-hop and trap music, and the bling aesthetic. “It’s not so much about the textual information, but about the lavish lifestyle, the flossing culture and how to convey that through the imagery and the way the text is presented,” said he declared. Coombs considers this evolution to be an integral part of dancehall culture. “It’s rebel music within our culture,” she said. “They are creative and don’t limit themselves; and when it comes to how they present themselves to audiences, the sky is the limit.

Robin Clare is an innovator, bringing her dancehall-inspired art into the animation space. Originally from Jamaica and now residing in Australia, Clare said that after leaving the island, her art “was, in part, a nostalgic thing. Dancehall takes over your body and mind, and you kind of want to live in the sound and the moment.

His work certainly captures that spirit. Like the original hand-drawn party posters, his designs are bright two- or three-tone animations with bright, contrasting colors. GIF animation allows his work to highlight the movements and expressions of dancers in action: shaking hips, kicking legs, executing movements directly from the dance floor. She and other artists are showing a new dimension to dancehall art and imagery, using technology and social media to bring dancehall from the streets into cyberspaces.

Yet, even as the art of dancehall progresses, it pays homage to those who came before it. Like the music that inspired it, this art form “is rebellious,” says Campbell. For Clare and the many lovers of this unique aesthetic, it’s “a way to stay connected at home.”