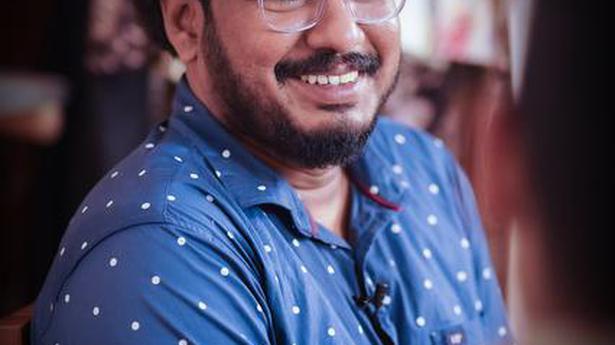 From poster design to acting: why Malayalam actor Aneesh Gopal is turning heads

Actor Aneesh Gopal is happy with the recognition he received after the release of Bramam. “It took a while, but now other people know my name,” says Aneesh. “Usually I’m that ‘curly haired guy’ from Theevandi. Each actor is thirsty for recognition. Isn’t the reward that motivates us all? This is the recognition I have dreamed of so much over the past 12 years.

Read also | Get ‘First Day First Show’, our weekly movie world newsletter, delivered to your inbox. You can register for free here

Getting here was difficult. The first movie he starred in was Second show in 2012. A love for movies brought him to Kochi from Malappuram. The film’s director, Srinath Rajendran, and writer, Vini Vishwa Lal, are his friends. “They knew I was doing plays in school and college, so they asked me to do a part in them.” They also asked him to design the movie poster since he was a graphic designer.

“Cinema is my dream; it always has been. But I realized it was a volatile industry in which there are no guarantees. You may or may not get there, so it needs a backup. I couldn’t pursue my dream without a career because my family depended on me.

the Second show The team liked the poster and Aneesh found his career designing posters for movies.

He then put his acting dream on hold to focus on design. “When I started, I sat wherever I found a space and did the design. Film sets have been my “office”. My company, Yellowtooths, now has a team of six people and an office in Kochi In seven years, he has built a career that boasts an impressive list of films – joji, Nizhal, #Homepage, Operation Jawa, Kurup, Iyobinte Pusthakam, Halal love story, Kalki, Theevandi, Godha, 5 Sundarikal, Ennu Ninte Maideen, and Vijaysuperum Pournamiyum, among others.

With his business on the right track, he had time to pursue his dream and he landed his role in Theevandi (2018), for which he designed the poster. He made quite an impression as one of Tovino’s friends, Saffer. The 37-year-old says, “I had to act like a schoolboy, it was a lot of hard work, especially losing weight to look like a high schooler!”

After Theevandi came a slew of films such as Kalki, Argentina Fans Kaattoorkavu, Adi Idi Vedi, Jeem Boom Bhaa and Nizhal. “I accepted all the films that came my way, as if to make up for lost time. I was not particularly selective. My friends in the industry told me to choose my films rather than being blind.

After Theevandi, it was his job in Bramam which caught his eye.

“This movie has so many big names…there’s Prithviraj and it’s directed by Ravi K Chandran. Then there’s Jagadish sir, whose movies I grew up watching!

Working with actors who had years of experience was disconcerting, says Aneesh. “I was extremely intimidated, at the thought of acting with RajuEttan (Prithviraj), with whom I had quite a few scenes. Not only is he a great actor, but also a brilliant technician. He made us all feel comfortable. If we got stuck, he showed us how to approach a scene; this way, we had to do very few retakes.

The years have made him more confident. If he was extremely nervous on the sets of Second show, he has now come up with a method to deal with it. “I have the character’s story, a story that I tell myself and act on. Getting the nuances of a character is then easy for me.

The offers haven’t started pouring in yet, but the length of the roles he’s committed to have increased. Among the major films in his kitty are Karnan Napoleon Bhagat Singh, Eeyal, and Thattasserry Koottam.