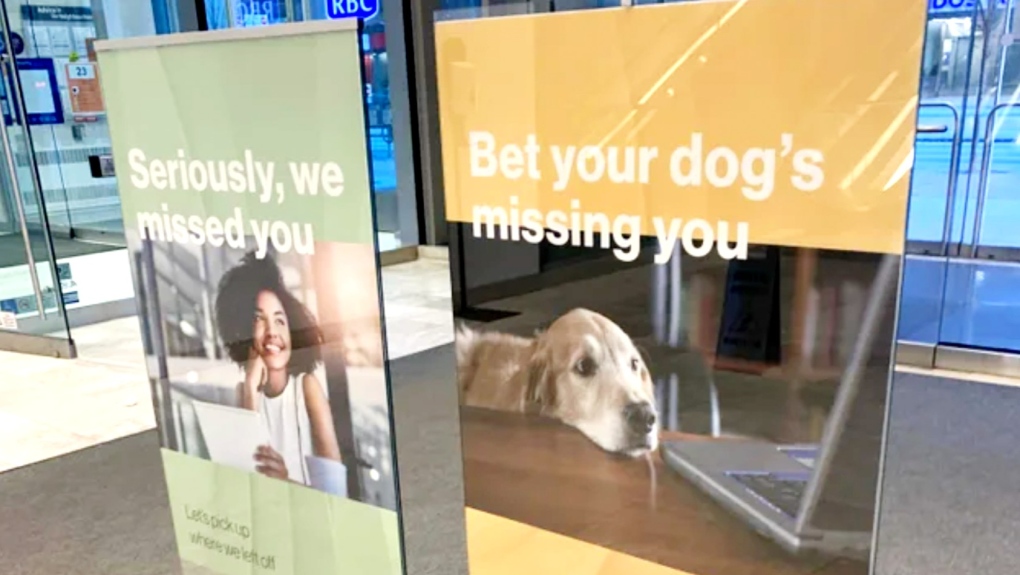 A building in downtown Toronto was forced to remove signage to welcome employees back to the office last week.

Oxford Properties had placed signs in the lobby of a building, located at 20 Bay Street, “in an attempt to be light”.

One sign reads, “Seriously, we’ve missed you,” while another asks, “Do you still miss your sweatpants?”

A third sign reads, “I bet your dog misses you.”

In the lobby of an office building in Toronto. I guess to make sure employees are flooded with resentment as soon as they walk through the door? pic.twitter.com/oWUDofGvzK

Some passers-by were less than happy with the message.

“I thought the signs weren’t very kind to people starting to go back to the office,” the social media user, who shared images of the signs, told CTV News Toronto on Tuesday. “My employer has embraced the hybrid model and I’m grateful for that.”

Others on social media expressed their disappointment – with one calling the signs “demeaning” and “condescending”.

“The dog would make me turn around and go home,” one Twitter user wrote.

When contacted for comment, Oxford Properties told CTV News Toronto that signage was posted to “welcome customers back to [the] building.”

“Unfortunately, in an attempt to be light-hearted, the signage proved indifferent, which was never our intention. The signage clearly missed the mark and was removed last week as a result,” said one spokesperson in a statement.

“The campaign should not have gone into production and we sincerely apologize to all customers, colleagues and members of the public who were offended.”

A survey conducted last year by the Business Development Bank of Canada found that 55% of employees would like to continue working from home even when the pandemic is over.