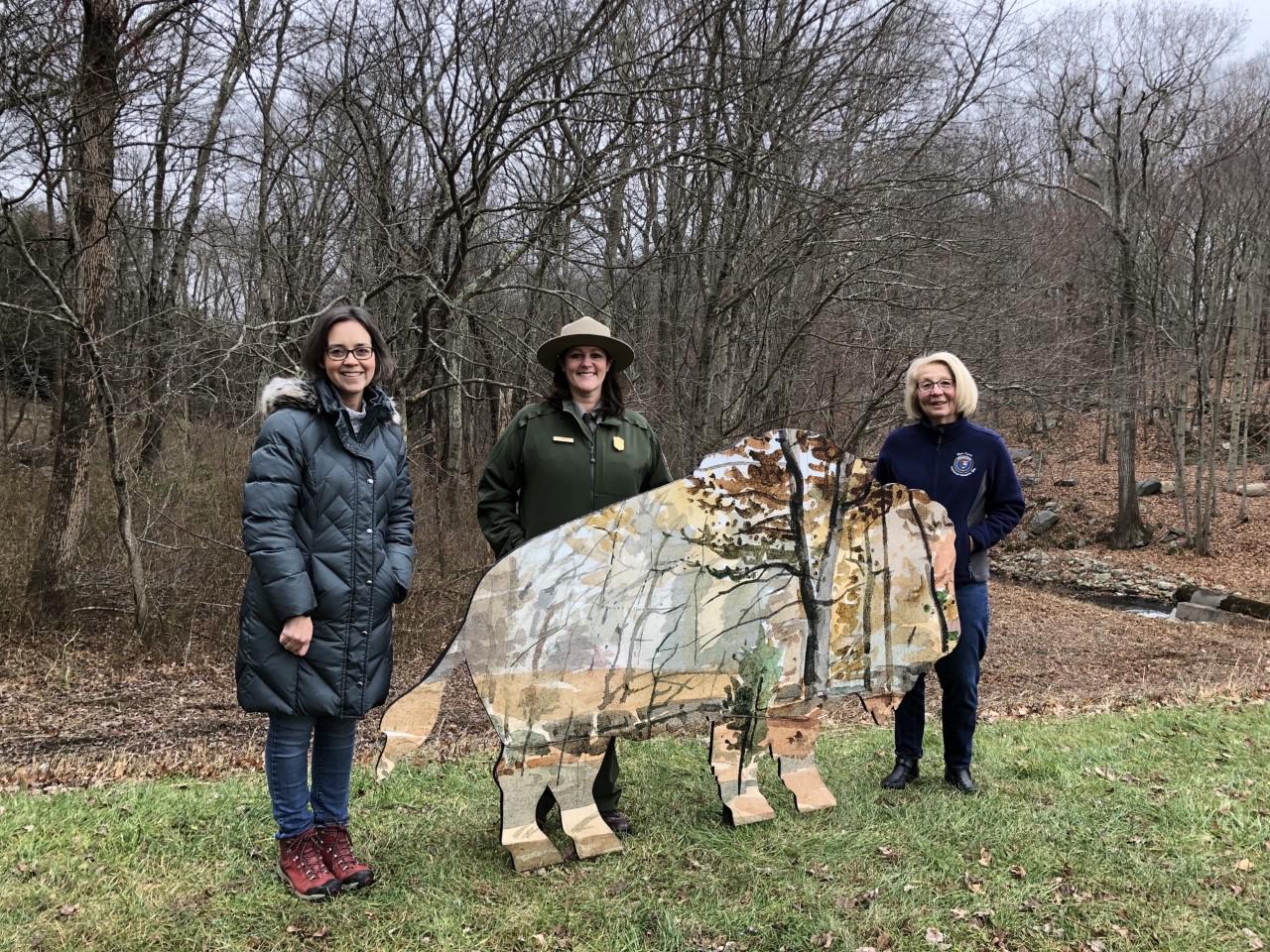 Thanks to the efforts of the Friends of Weir Farm National Historic Park, one of seven life-size Centennial Art Bison has found its new home at the Nature Centre.

The Centennial Art Bison was created to commemorate the 100th anniversary of the US National Park Service in 2016. In late January, the bison art sculpture found its new home and was fully installed at the Woodcock Nature Center.

The artwork is located on a hill that overlooks the wetlands and forest bordering the southern end of the Nature Center Reserve along its orange trail.

According to the Nature Center, the Art Bison is a life-size wooden silhouette of an American bison that is covered in paintings by Weir Preserve artist Sperry Andrews, created in 1985.

Andrews was an integral part of one of three generations of artists who lived and created their art at Weir Farm.

The Art Bison were previously placed in the Weir Farm Historic Landscape from 2016 to 2018. At that time, the bison were not covered in watercolors.

Several years after its initial presentation, the statue was later covered with paintings from the three generations of artists who lived and created art at Weir Farm.

Woodcock noted that the statue also honors the American bison, which serves as a symbol of the US National Park Service.

A number of other bison were moved to the G&B Cultural Center in Wilton and Beardsley Zoo in Bridgeport.

Each Art Bison features a descriptive plaque on its back that details the artwork the sculpture shows.

In its new location, the bison will “inspire visitors to the Nature Center,” they said in a statement, noting that it will provide a bridge to appreciate local art from the past.

“Centennial Art Bison has been a huge success, capturing the imaginations of over 100,000 park visitors,” said Friends of Weir Farm President Judy Wander of the new initiative.

She went on to add that the bison’s new home provides many opportunities for appreciation for visitors.

“We are extremely grateful to Woodcock Nature Center for providing a new home for this art bison where it will continue to delight visitors,” Wander said. “The setting is a perfect place to showcase the works of Sperry Andrews and inspire the public to appreciate outdoor art in nature.”

“Woodcock is thrilled to provide a place for this unique work of art to continue to be enjoyed by the community,” said Woodcock Nature Center Executive Director Lenore Eggleston-Herbst.

The sculptures will also be featured in future programs.

“Our educators look forward to incorporating it into our ongoing programming related to the history of the earth, native animals and habitats as well as the intersection of art and nature in our culture. We invite visitors to experience the bison and the rest of our 150-acre preserve at their own pace, from dawn to dusk, every day,” said Eggleston-Herbst.

While surveying the featured bison art, visitors can also experience the many aspects the Nature Center has to offer, such as nearly four miles of publicly accessible forest trails and historic stone walls and crafted stands. from old maple, beech, oak and walnut that cross the trails. Woodcock also includes a pond and numerous wetlands which are home to a variety of local wildlife including snakes, frogs and lizards.

Woodock also has an “Everglades-style boardwalk” that allows rare access through some of the rich and abundant wetlands nestled in the woods on the property.