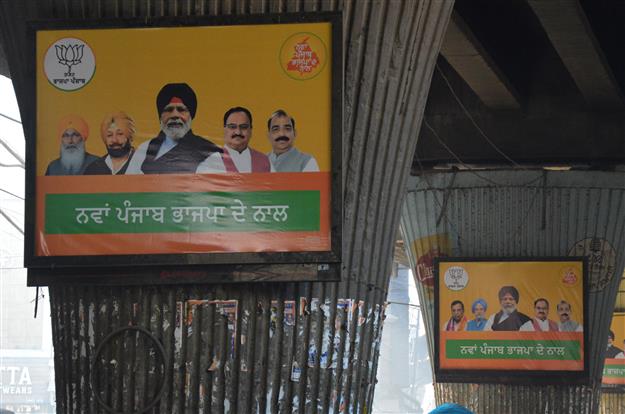 The Bharatiya Janata Party (BJP) is adopting all measures to strike a chord with voters. From holding virtual rallies to meeting people by going door-to-door, the BJP leaves no stone unturned. The posters put up by the party also got a new look keeping in mind the culture of the state.

Posters put up by the party earlier had Prime Minister Narendra Modi in the center flanked by Union leaders. Replacing these posters, the BJP has now come up with new posters which show Modi in Punjabi attire and wearing a turban. The poster also shows leaders like Capt Amarinder Singh and Sukhdev Singh Dhindsa of Punjab who recently entered into an alliance with the party.

A local BJP leader said these are different colored elections. Every party tries to grab the attention of voters in one way or another.

A voter from Ludhiana West Constituency said this is the time when each political party is trying to woo voters through various measures.

“Now that the elections are approaching, they are doing everything to attract voters to their party. For some castes or religions it may be important, but for me, anyone who has a good program for the development of the state will get my vote,” she said.

Another voter, Sukhwinder, said that until the elections, political parties will make many changes to their posters and brochures with the interest of the people in mind.

“Since Punjab is primarily a Sikh state, posters portraying facets of the state were inevitable. People should use their franchise wisely,” he said.