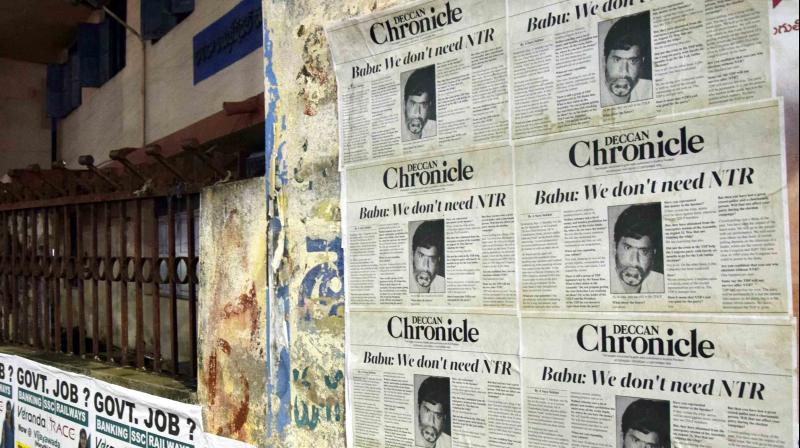 Posters with DC clip of “Naidu vs. NTR” go viral in Vijayawada

VIJAYAWADA: Posters with a news clip of Deccan Chronicle 25 years ago, a quote from TD chief Chandrababu Naidu titled ‘Babu: We don’t need NTR’ was found plastered all over town on Sunday, catching the attention of the general public.


In some places, however, unidentified hands ripped off the posters. The clipping was from an interview given by Chandrababu to Deccan Chronicle at this moment.


Notably, Health Minister Vidadala Rajni, while introducing a health university renaming bill during the monsoon session of the assembly, had shown the DC clip “Babu: We don’t need NTR”, released by DC 25 years ago. Referring to the clip, she also quoted Naidu saying that there were no moral values ​​in NTR and therefore the TD didn’t want NTR.


She said it reflected the kind of respect and dedication Naidu had for NTR, and added that Naidu or current versions of TD were not allowed to talk about NTR.


Political analysts say Dasara will start from Monday, during which thousands of devotees from across the state will visit the temple of Goddess Kanaka Durga in the city. In such an environment, the “Babu: We don’t need NTR” posters posted all over the city were meant to expose Naidu’s anti-NTR positions among the public, they said.