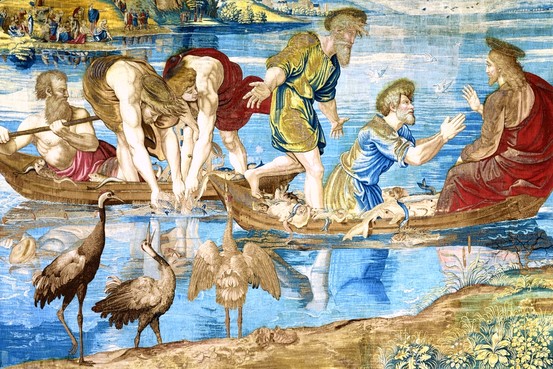 Raphaël: caricatures and tapestries for the Sistine Chapel, at the Victoria & Albert Museum | woven into the fabric of art | By Tom L. Freudenheim

Imagine a very first five-week museum exhibition with a subject as familiar as Raphael (1483-1520). This is what the Victoria & Albert Museum in London serves, exhibiting four of the master’s tapestries of the Sistine Chapel alongside the museum’s own designs (i.e. huge designs created as models) for these large woven works. Even Raphael never got to see his paintings, depicting scenes from the lives of Saint Peter and Saint Paul, alongside the finished tapestries.

Commissioned by Lorenzo de’Medici’s son, Pope Leo X, in 1515, the tapestries followed earlier decorations in the Sistine Chapel, including the famous ceiling frescoes by Michelangelo, commissioned by Leo X’s predecessor, Julius II. Seven of the woven works were unveiled in the Sistine Chapel with a grand ceremony in 1519, and due to the fragility of the tapestries, all 10 Vatican tapestries are only exhibited on special occasions.

The four tapestries on loan to the V&A honor Pope Benedict XVI’s state visit to Britain earlier this month. The cartoons have been on long-term loan to the V&A by British monarchs since 1865. The unique circumstances of this exhibition require one to begin viewing the works by comparing each of the four tapestries with the comic strip from which it was drawn. woven. At first glance, this may seem naive, given the many other technical and art history issues that interest us here, which are addressed in the expansive but concise exhibition catalog. These tapestries were, after all, among the most famous works of the Italian Renaissance. In 1787 Goethe wrote that he wanted to see them.

But examining the beautiful assorted compositions side by side reveals how different cartoons and tapestries are from each other, and how superior cartoons are to our modern eyes. They present the pattern, shade and range of warm and cool colors that we associate with other monumental works by Raphael. The gestures and facial expressions remind us why RaphaÃ«l has remained a singular inspiration for the generations of artists who have followed him. Giorgio Vasari (1511-1574), the first true art historian, described Raphael as a “mortal god”.

The cards consist of colors placed on a charcoal drawing on paper; they were then cut into strips for use in the Brussels workshop of Pieter van Aelst, where the tapestries were woven. Seven of the cartoons were acquired by the Prince of Wales (later King Charles I) in 1623, and brought to England for use in the tapestry workshop established in Mortlake a few years earlier. (One of these tapestries, from 1637, is also included in this exhibition.) Reassembled and mounted on canvas in the 1690s, the cartoons were displayed in a gallery designed by Christopher Wren at Hampton Court Palace in 1699.

The influence of the tapestries is evident from the work of Albrecht DÃ¼rer, the contemporary of Raphael, while both Peter Paul Rubens and Nicolas Poussin also produced works reflecting their impact. But seen next to the tapestries, the cartons seem much more modulated, suggesting the differences in the mediums used.

RaphaÃ«l: Cartoons and tapestries for The Sistine Chapel

While not all of the cartoons survive, the rest are daring compositions of subtle and varied formal structure, each of which can likely be schematically deconstructed to show impressive complexity. The tapestries enlarge these images by enclosing them in frames that include decorative and historical themes unrelated to the apostolic action of the primary scene. They are mirror images of the cartons, due to the weaving technique, executed in wool, silk and thread wrapped in golden metal. The fading of some of the dyes, along with the limitations inherent in a woven backing, results in tapestry images that often look very different from their cartoon sources.

Such differences have never been evident before, other than through photographic reproduction. This is the first time since they were in the weavers’ workshop – almost 500 years ago – that they have been seen together, and even then the cartoons weren’t put together into full pictures, different parts being attributed to different weavers with particular skills in such a field as figures and landscape representation. Each medium accentuates unique aspects of the composition, and it’s not always clear why this happens, whether it’s due to the fading or different accents from the weavers.

But it resulted in an exhibition that got visitors to take an intense look at works that they may never have fully appreciated before, even those of us who have seen the work in London and Rome. And since RaphaÃ«l created the boxes for the tapestries, one can wonder what elements of the composition he intended to accentuate. For example, in “The Healing of the Cripple” (Acts 3: 1-8), the traditional twisted columns (a reference to Solomon’s temple) are powerful framing elements in the cartoon, while in the tapestry, the thread gold actually makes the columns appear faded, forcing the figures further into the foreground. Yet the same fading of hues creates a more dramatic effect in the tapestry on the lame himself, with dark threads accentuating his nose and lips and a still very scarlet ribbon on his pale beige shirt.

Nowhere are these differences more apparent than in the most familiar of these compositions, “The Miraculous Draft of Fishes” (Luke 5: 1-10). The dramatic gestures – Peter kneeling before Christ, Andrew swinging on the small canoe, the two figures leaning towards the fish – seem much more tense and exciting in the cartoon, where varied modeled flesh tones (relatively monochrome in tapestries) give vibrant colors. life to the actors.

While â€œonce in a lifetimeâ€ is a hackneyed clichÃ© in our world of competing museum events, this exhibit certainly qualifies for that description. Presumably, there were more important reasons for Pope Benedict’s visit to England, but if it was only to provide an excuse for this spectacle, that would be reason enough.

Mr. Freudenheim is a former Art Museum Director and has served as Assistant Secretary for Museums at the Smithsonian Institution.