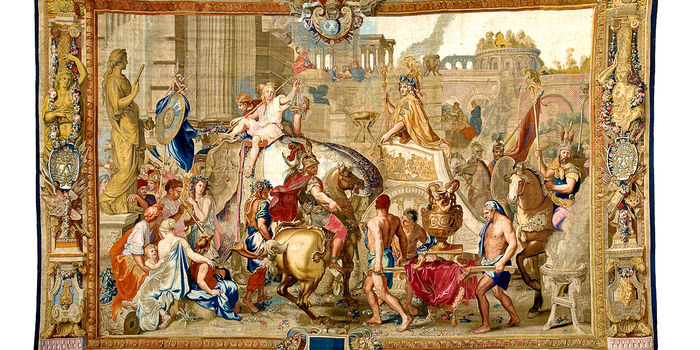 Even now, centuries after the heyday of European royalty, nothing proclaims the divine right of kings like a huge tapestry. And no monarch has projected his power better through this medium than Louis XIV, the Sun King of France, who reigned from 1643 to 1715. Evidence of his prowess can be seen in “Woven Gold”, an exhibition of 15 Breathtaking tapestries produced between the mid-16th century and the end of Louis’ reign, on display at the Getty Center in that city’s Brentwood neighborhood through May 1.

The exhibition, which will not travel, is billed as the first major tapestry exhibition in the western United States in four decades and consists primarily of materials on loan from the Mobilier National in Paris, a storage facility created under the reign of Louis and still the main repository for decorative objects collected during the Bourbon dynasty. Eleven of the tapestries have never been exhibited in this country.

These works, which were to be appreciated from a distance, stand over 10 feet in height – most are over 15 feet – and span an even greater length, with the widest reaching almost 27 feet. So it’s a privilege to see them hanging on something near eye level, as looking at them up close provides a rare opportunity to more fully appreciate the extraordinary workmanship and exquisite craftsmanship of their construction. Dozens of anonymous weavers and dyers produced these tapestries – made of silk, wool and metallic threads – but the designs were often the work of big names such as Raphael, Rubens and Charles Le Brun.

The subjects range from the mythological (“Neptune and Cupid plead with Vulcan for the liberation of Venus and Mars”) to the biblical (“The daughter of Jephthah”) to the historical (“The battle of Arbela”), but the principle organizer here does not focus on what inspired these works, but rather on how they ended up in Louis’ possession. Thus, the first section of the exhibition presents tapestries purchased for Louis; the second, those he inherited; and the third, those ordered by him – the latter all made at the famous Gobelins factory, established under the aegis of Louis in 1662.

Art lovers can debate the relative grandeur of these hangings, the intricacies of the expressions of their figures, the ornamentation of their borders, even the degree to which age has tarnished their colors, but the overall appreciation of them will only be strengthened by seeing surviving parts. painted canvas (or “cartoon”) used to guide the weavers for “The Entrance of Alexander to Babylon” by Le Brun. Instinct tells us that the end product (a copy of a copy, so to speak) should appear coarser than its model. But the opposite is true: Despite its size (16 Â¼ by 26 Â½ feet), the tapestry is full of delicate shading and intricate detail.

In the last gallery, visitors will find a particularly interesting juxtaposition: two similar but not identical representations of the castle of Louis in Monceaux suspended one in front of the other. The first, sized for a palace, is part of a series by Le Brun associating royal residences with the months of the year and the corresponding signs of the zodiac. The second, a woven copy for an unidentified patron, is stockier and suitable for an imposing but smaller home. The two find Louis at a boar hunt, with the castle in the background. But while the original features a border with monarchic symbols and a virtual aviary in the foreground, the copy substitutes a simpler frame of flora and foliage and fewer birds. And while the latest version is rendered coarser in all respects, its colors remain much more vivid.

Two other tapestries, each placed on the shore, also invite a close comparison. The first, â€œConstance names Constantine as his successorâ€, conceived by Rubens, relates the passage of power from father to son, symbolized by the exchange of an orb. Below them is the most realistic and saddest figure in this exhibition, an old and exhausted Neptune, leaning naked on his now useless trident. Waves, sand and seashells are depicted with exceptional verisimilitude, as are the dresses of the two monarchs, their metallic threads still radiating authority nearly four centuries later. A much more animated scene takes place among the sons of “Winter, Cybele begs the return of the sun”, designed by Pierre Mignard, in which BorÃ©e, the Greek god of the north wind, blows snow and hail on a Cybele. lying down while the Pleiades soak it in the rain. The weather effects are spectacular, but the vivid water birds in the foreground are no less impressive.

Power passes away, as Rubens’ tapestry rightly suggests, but its attributes can survive far beyond their animating force. The political aspects of these objects no longer concern the casual viewer, but that hardly dulls their artistic impact. “Woven Gold” recognizes the intricate origins of these pieces while celebrating their much more basic appeal.

M. Mermelstein writes for the Journal on Classical Music and Cinema and has long been interested in Louis XIV.

Tom and Charlotte awarded on rich tapestries of life

Use artistic tapestries to decorate your home