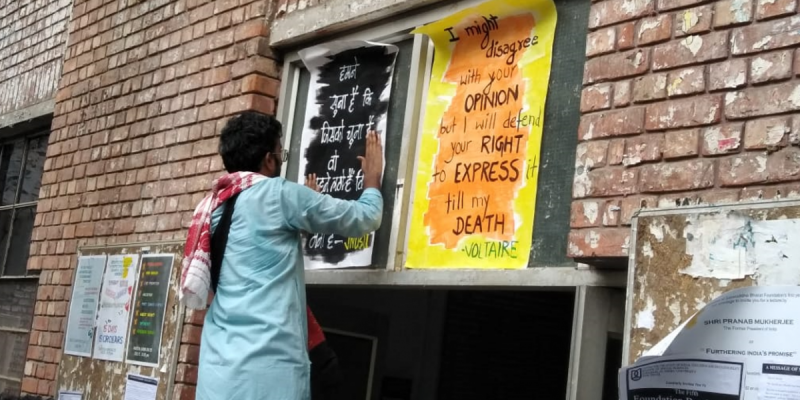 New Delhi: Several Jawaharlal Nehru University (JNU) student activists are facing disciplinary action for sticking posters on campus walls in 2019, before the COVID-19 pandemic. Most of these students pursue a doctorate and are denied admission for the current semester until they have paid a fine for their “gross misconduct”.

However, posting posters on the walls of the JNU campus was not against university rules until 2019, when the Vice-Chancellor (VC) and current Chair of the University Grants Commission (UGC), Mamidala Jagadesh Kumar, passed the Deterioration of Property Prevention Act (DPDP) in Delhi. . Since then, several student activists have received show cause notices, fines, and have been investigated for posting any type of posters on campus walls.

JNU wall posters have a rich heritage since the university’s inception. When architect CP Kukreja rushed inside the office of JNU’s first VC, G. Parthasarathi, complaining that students were putting up posters during the university’s first student union elections in 1971, Parthasarathi softly replied, “It’s a campus in a democracy. Let the buildings speak to the students. Let it become their canvas. Since then, these walls have become intrinsic to the idea of ​​JNU and have been widely covered in international and national media as canvases for student thought.

NS Balaji, former President of JNU Student Union (JNUSU), said Thread that he was fined and is currently being denied admission in his fourth year of PhD for putting up posters in 2019.

“The JNU administration removed all large posters after this new rule was enforced in 2019. In protest, JNUSU held a protest march and put up posters, for which I was sentenced to a fine by old VC and now denied by new CV. JNU has a long heritage of speaking walls to students. Now it is a crime to continue this legacy,” he said.

The poster for which Balaji was punished quoted Voltaire’s famous line: “I might not agree with your opinion, but I will defend your right to express it until I die”. While pointing out the diversity of these posters, Balaji pointed out that he would not pay the fine since he had not committed any crime.

“Posting posters on any college campus cannot be a degradation. What are these posters? These posters do not call for genocide or attack anyone; rather, they are about what we as a society should stand for. These posters were diverse and included quotes from Ambedkar, Phule, Periyar, Bhagat Singh, Nelson Mandela, Martin Luther King Jr., etc. They [the government and the administration] can’t respond to such ideas, so they invoke the Defacement Act,” he said.

Also read: World Over, a series of students protest against violence on campuses in India

Simone Zoya Khan, former vice president of JNUSU, who was also fined, pointed out how student activists since 2016, after Kumar became the VC, have been particularly targeted and financially harassed by the administration all six months in the form of huge fines and “rigged investigations” for speaking out and asking questions.

“In most cases, these fines are arbitrarily imposed since we are student activists from economically weaker backgrounds. We are not even surprised by this decision of the administration. There was a time when we paid 70,000 to 80,000 rupees thanks to the help of the union and crowdfunding. Requests are decided in advance and are only formalities. All of this is done to deter students from protesting and gathering within the university.

khan said Thread that the JNU administration is “choosing protests and witch-hunting student activists” while being biased towards the Akhil Bharatiya Vidyarthi Parishad (ABVP), forcing ordinary students to approach the Delhi High Court for protect against such exorbitant fines and irrational sanctions.

“No one from the ABVP has ever been fined. Once they broke windows and flowerpots in the administrative block, for which only an investigation was carried out. One of those fellows, Saurav Sharma, who was caught in crystal clear video, is now an assistant professor at JNU. The same thing happened in the case of Najeeb, who was brutally attacked by the ABVP before his disappearance. Unfortunately, only the rooms of Najeeb’s attackers have been changed in the hostel,” she said.

Shubhanshu Singh, former co-secretary of JNUSU, who was also fined, while pointing out how such tactics are planned by the administration, said Thread that the JNU administration employs security guards for surveillance, who capture students on camera, sometimes even holding banners or signs, and wrongly punish them under the new disfigurement rule.

“The administration is strategically planning such punitive actions against student activists. Whenever an issue becomes inactive and they know it won’t be possible for us to mobilize, they act against us,” he said.

Another student requesting anonymity said Thread that Delhi Police, in a similar development, recently opened FIR files against at least 30 students from 2018, which have been kept in cold storage as of now, relating to protests and gheraos near the administrative block regarding the issue of increased fees and mandatory attendance. The students involved were not even aware of these FIRs and are now being summoned by the authorities.

U.S. consumers set to save billions with bank overdraft reforms