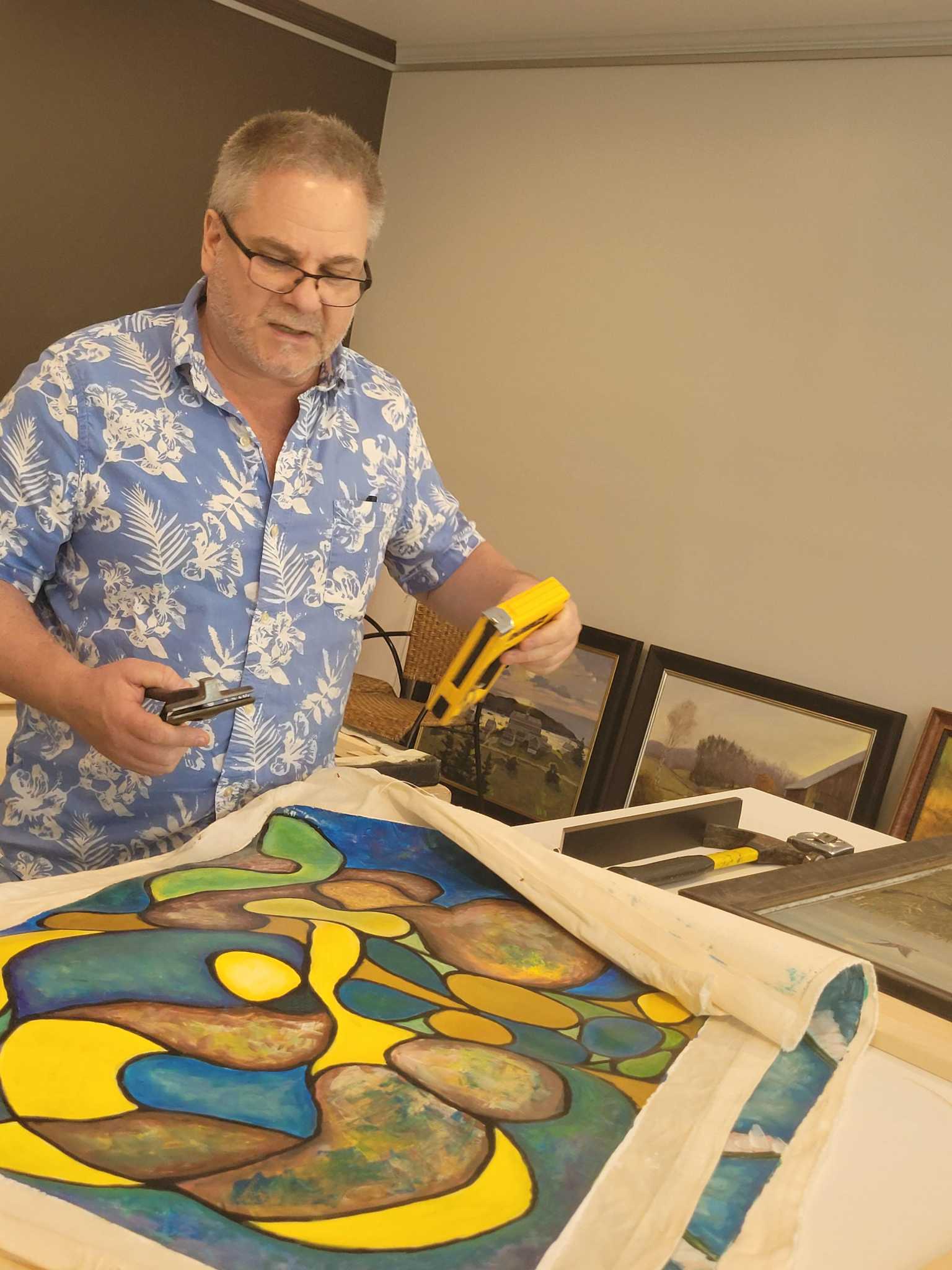 NEW MILFORD – When Greg Mullen opened the Gregory James Gallery and Framing in 1996, he rented a small storefront on Bridge Street in downtown New Milford.

The boutique, which opened in mid-July, is ideally placed to attract the attention of year-round visitors and the growing horde of city dwellers moving to Litchfield County. But the gallery’s steady growth is also a testament to Mullen’s solid reputation in the New Milford area, earned through a keen eye for expert framing and a keen eye for fine art.

“I started as a framing shop and was initially part-time,” said Mullen, who grew up in New York but moved to New Milford during his high school days. Mullen’s parents are artists: his father was a painter and filmmaker, while his mother was a musician and also gave cooking lessons.

Mullen himself had a penchant for technique. After several career starts, he ended up working on a team for Nestlé that remodeled the company’s facilities. The work was steady and somewhat creative, but Mullen became restless. So he took a framing course and worked part-time at several local framing shops.

This led to Mullen’s decision to open his own boutique. To avoid the financial blow that would have followed his departure from a full-time position with the company, he initially kept part-time hours at his store. He worked a full day for Nestlé, arriving at the store at 5 p.m. and working late into the night.

The business grew and two years after opening its doors, framing and art became a full-time activity for Mullen.

The new location is the Gallery’s fifth home and is the first building Mullen owned. He’s been three-quarters of a mile down Route 202 from his last storefront, which he rented. This old building is up for sale, prompting Mullen to seek larger permanent accommodations.

Mullen’s new space is approximately 800 square feet larger than the old location. This larger footprint will be especially helpful for art exhibits, which Mullen plans to restart this fall. This will be his first public exhibition since the start of the COVID-19 pandemic in early 2020.

“The state shut me down for three months in 2020 because my business was deemed non-essential,” Mullen said. “Then as soon as I opened my doors again, the traffic picked up and hasn’t slowed down since.”

Much of this new traffic came from newcomers to the area, who moved to New Milford and surrounding New York towns and other urban settings. Unprecedented house price increases and strong home sales have provided a significant boost to his framing business. Art sales made up half of his business, framing the other half. Today, framing represents about 75% of its activity.

“All of these new buyers are decorating their new homes, which drives up sales,” he said. “Some of them are very large houses, so now I often frame very large works of art.”

As an example, Mullen held up a 48 x 96 inch abstract painting that just fits one of his work tables. To its advantage, the Gregory James Gallery is the only frame shop for miles around. A store several miles south on Route 202 closed about five years ago, although the building still bears a sign.

Most new business these days comes from word of mouth, referrals, Google searches, and positive reviews online. This marks a dramatic shift from the late 1990s, when Mullen bought ads in newspapers and yellow pages to get noticed. Today, Google is making search hyper-local, meaning customers find it on their own computer or phone.

“The framing shop is, in particular, a local business,” Mullen said, which means customers want services close to home. Mullen also maintains a Facebook page and hires a local public relations specialist to publicize the store and its work.

Clients often arrive with their own unstretched canvases, which is when Mullen really shows his talents. Each edge of a canvas must be slowly – and painstakingly – stretched over a frame built expressly for the dimensions of the painting.

Mullen points out that even in the most skilled hands, using a poor quality stretch frame will not yield the quality results that Mullen desires. For this reason, it uses a range of well-designed stretch frames made in Canada.

The art gallery features the work of approximately 15-20 artists, most of whom live and work within a 100-mile radius. Local landscape artists are always in abundance, but there are also a handful of contemporary and abstract paintings.

The late Woldemar Neufeld has been described as the gallery’s flagship artist. The shop stocks more than 50 originals by Neufeld, which specializes in linocuts and watercolors of New York and New England scenes.

Another established artist on display is Frank Metz of Roxbury, whose work specializes in semi-abstract pastel landscapes and water scenes. Also on display are works by contemporary artist Jorge Silveira, who uses leftover trash to compose his works. But Mullen is also looking for emerging talent, including a multicolored ink and acrylic self-portrait by Greg Orban.

“Art is one of the last things new home buyers will add,” he said. “After buying furniture and appliances, that’s when they contact me.

“We help talented artists get the support and recognition they deserve and sell their artwork,” Mullen said. “Meanwhile, those who buy the art, or come for framing, beautify their homes with things that are beautiful, special, and inspiring. It’s been a wonderful experience to be at the center of all of this creative exchange.

The Gregory James Gallery is located at 149 Park Lane Road in New Milford; phone 860-354-3436. You can also browse some of the store’s art collection at https://gregoryjamesgallery.com/.