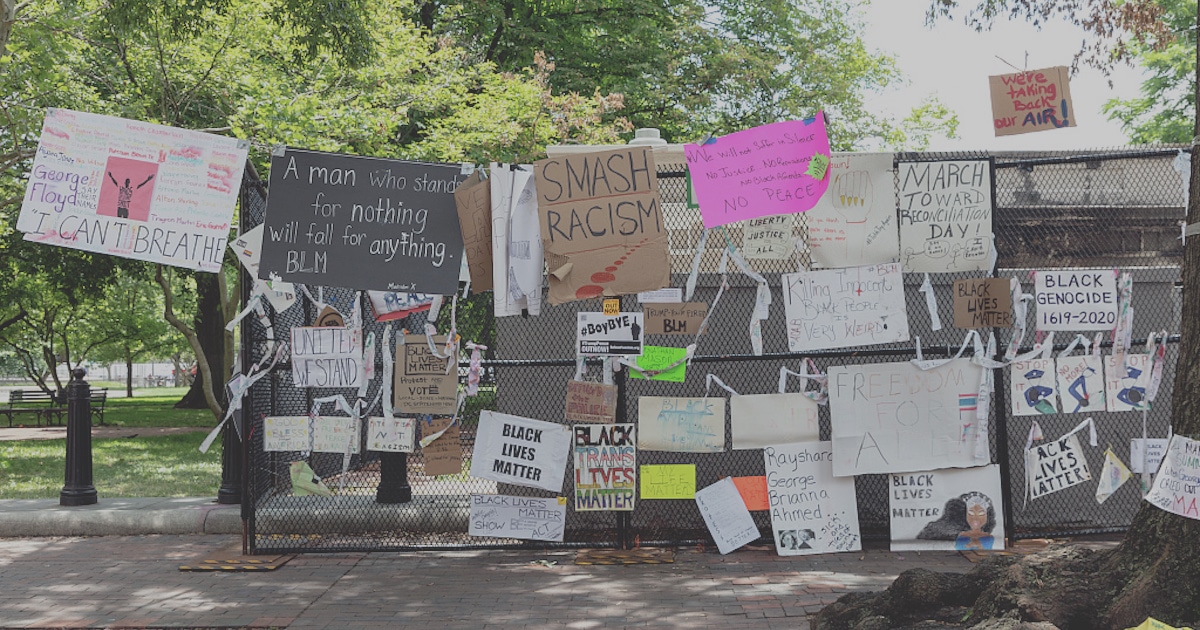 As protest took to the streets of Washington DC during the summer of 2020, the fence that once stood between the White House and protesters in Lafayette Park slowly turned into an exhibition of living art. Although the barricade was originally erected for security purposes, protesters took it upon themselves to convert the barrier into a makeshift gallery wall. As his collection grew, the fence displayed countless Black Lives Matter posters, signs and artwork created in defiance of the rampant police brutality and racial injustice that led to the murder of George Floyd – and countless other black men and women who have fallen victim to equally unjust fates.

The fence was finally taken down in early 2021, and with it, the exhibit that has since become known as the Black Lives Matter Memorial. But in the year since its removal, several activists have dedicated themselves to preserving each artifact on the wall — a collection of nearly 800 pieces — recognizing each as an important part of American history. Thanks to their efforts and with the help of archivists, more than 30 works of art that once adorned the memorial are now available in an online exhibit hosted by the Library of Congress. Items included in the online display are now officially part of the Library’s collection.

“[The Library] wants people to see these signs, the messages, and contextualize them with other parts of our collection that deal with similar issues,” says Aliza Leventhal, Library Technical Services Manager for the Prints and Photography Division, who led the collection efforts.

Throughout the project, she worked in conjunction with the de facto curator of the fence, Nadine Seiler, who had made it her personal mission to guard, protect and preserve the memorial site. Seiler — who even slept at the memorial for a few nights to prevent nighttime vandalism to the site — and several other activists who joined his cause have been instrumental in enhancing the Library of Congress’ digital collection. For his part, Leventhal had also forged a deeply personal connection with the memorial by visiting the fence daily for eight months, witnessing its profound transformation.

“The signs ranged from handmade artwork brought from home or created on site, to pieces of paper with hastily written messages,” says Leventhal. “Every day new panels appeared, another person sharing their story and adding valuable layers to the ongoing fence conversation.” The Black Lives Matter posters in the library’s collection represent a small part of that conversation as well as the diversity of voices that contributed to its discourse. “I was more drawn to the humorous protest signs,” says Seiler. “I guess it’s the vein of, ‘If I don’t laugh, I’m going to cry.’ For me, it’s taking the tragedy of our dehumanization and alleviating it so it’s not so heavy on my psyche.

Now that the fence has been dismantled, the more than 800 panels removed by volunteers are housed in a storage unit in Washington DC. The artwork will remain there until it can be digitized by archivists at the Enoch Pratt Free Library in Baltimore, who are working in collaboration. with the DC Public Library. Once the digitization effort is complete, the coin donation process will begin.

According to Seiler, the organizers of the DC chapter of Black Lives Matter would prefer that the pieces remain in the possession of black organizations. However, the hope is that wherever they end up, people will recognize their significance and seek to understand the messages behind them. “I don’t know what it’s going to take, but whoever takes them has to agree to take care of them,” Seiler says.

Visit the Library of Congress website to view items from its digital collection available online.

In the summer of 2020, Black Lives Matter posters transformed a fence near the White House into a living memorial wall.

Now, some of these posters are in the Library of Congress’ digital collection.

Incredible Archive of African-American Photographer Added to Library of Congress

‘I HeART Connections’: Carrboro-based virtual art exhibition features artists from around the world