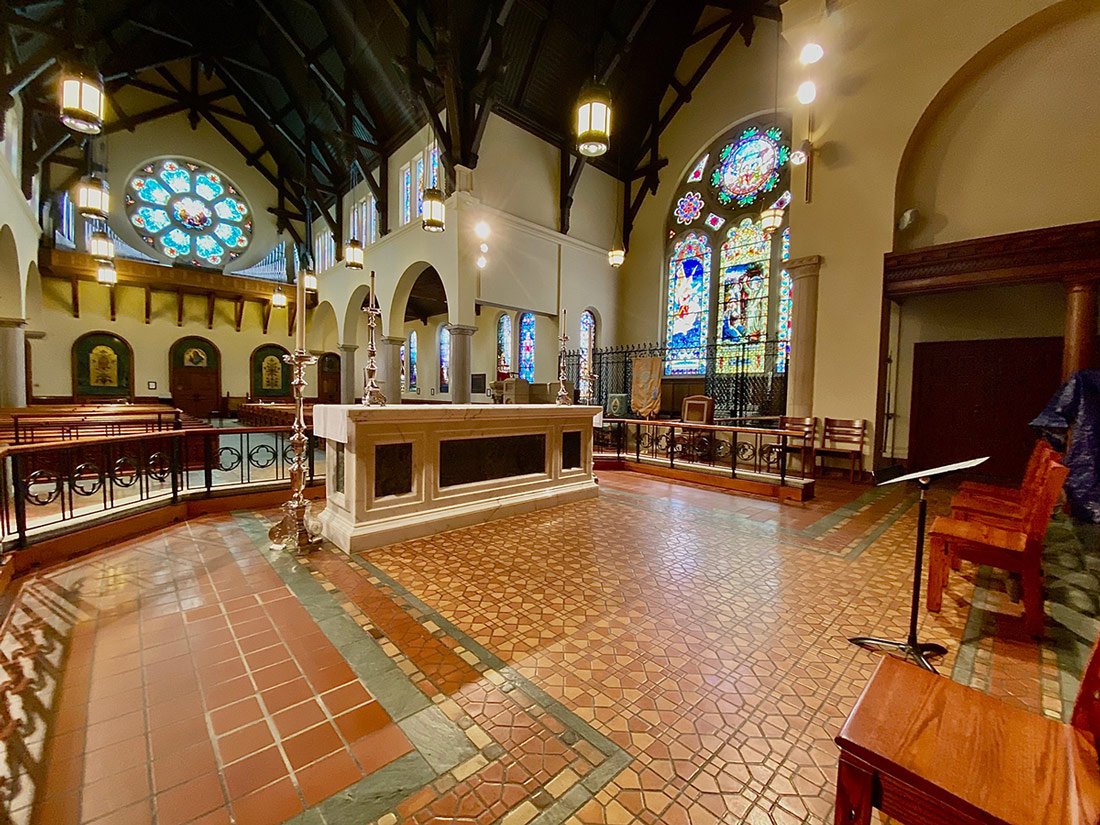 St. Paul’s Episcopal Church (914 E. Knapp St.) on the Lower East Side of Milwaukee was built in 1882. It was the second church built for Milwaukee’s pioneer Episcopal congregation. The Richardsonian Romanesque style church is well known for its Tiffany stained glass windows. The Hehe glass type was developed and produced from 1878 to 1933 at Tiffany Studios in New York by Louis Comfort Tiffany and his team of designers. The church has the largest collection of Tiffany stained glass in Wisconsin. This includes the largest window ever made by Tiffany Studios, which measures 30 feet long, 24 feet high and up to 2 inches thick. It’s a duplicate of Gustave Doré’s masterpiece Christ leaving the courtroom.

St. Paul’s is the oldest Episcopal parish in Milwaukee and the third oldest in Wisconsin. Founded in 1838, members included the esteemed families of Charles Bradley, Hamilton Townsend, as well as the Ogdens, Uihleins and Vogels. Their community standing has helped the church become the most influential Episcopal congregation in Wisconsin.

The building was designed by architect Edward Townsend Mix, an architect based in Milwaukee. Lake Superior sandstone, a dark red sandstone found near the Apostle Islands in Lake Superior, was used. The church features wrought iron by master blacksmith Cyril Colnik, who created iron gates, fences, and railings for many prominent Milwaukeeans. Over the years, St. Paul’s has received many gifts of fine furniture and artwork. In 1957, the church acquired an early 16th century Flemish tapestry depicting the engagement of Mary of Burgundy. The tapestry currently hangs in the Morning Chapel.

Stay up to date with today’s news

Subscribe to our free daily email newsletter to get the latest local Milwaukee news, restaurants, music, arts & entertainment, and events straight to your inbox every day of the week, plus a bonus email Week in Review on Saturday.

A committee, appointed by the church, established Forest Home Cemetery on the south side of Milwaukee, the final resting place of many of the city’s famous beer barons and social elite. When the land was chosen, it was located nearly two miles outside the city limits. At the time, it was believed to be far enough away from urban development to remain rural.

In 1994, Roland Perschon, a retired Milwaukee Public School teacher living in Pewaukee, had a set of eight bells cast by the Whitechapel Bell Foundry in London, England. This octave of bells is no ordinary set of church bells that simply swing back and forth or are struck by hammers. The bells are attached to large vertical wheels allowing the bells to swing in a full 360 degree circle. This method of ringing bells, called “Change Ringing bells”, originated in the early 1700s and is a uniquely English practice. Change Ringing is a team sport that involves a group of people ringing in rhythm, a set of tuned bells through a series of changing sequences that are determined by mathematical principles and performed according to learned patterns.

These bells will be the last set of Whitechapel bells to be installed anywhere in the world, a significant distinction for St Paul’s Church and Tower. The Whitechapel Foundry, which has been making bells since the mid-1500s, closed in 2017. There are 47 Change Ringing Towers in the United States, most located in Episcopal locations in the Eastern and Southern regions . St. Paul’s Tower will be the forty-eighth installation in the United States.

The parish collected about half of the $120,000.00 cost to install eight bells in the West Tower. The project is expected to be completed within the next year. Anyone interested in learning more about this acclaimed company and wishing to donate to the project should contact the parish office at 414-276-6277.

Adam Levin is the administrator of the Old Milwaukee Facebook group facebook.com/groups/oldmilwaukee and author of Fading Ads of Milwaukee.