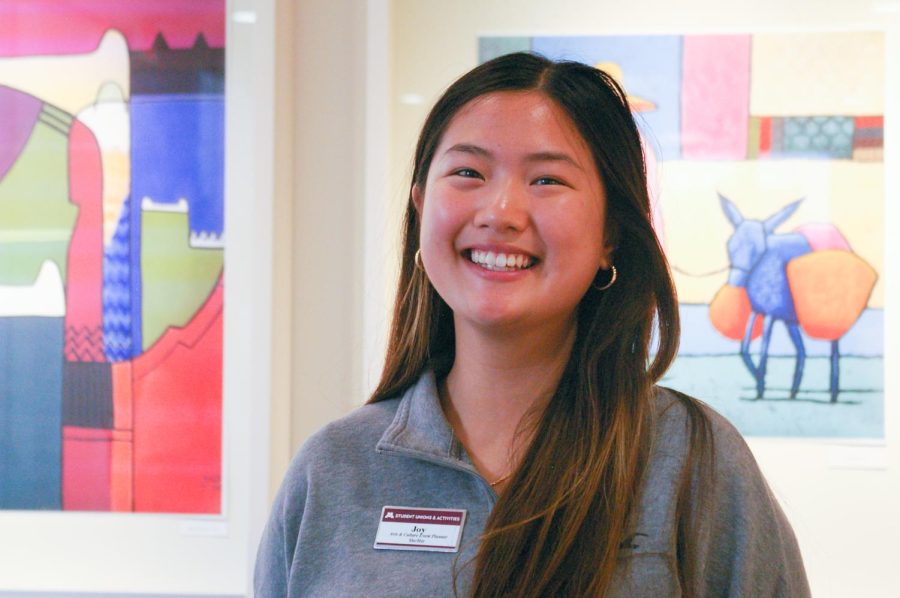 Rawan Algahtani collaborated with Student Unions and Activities to showcase artwork from his home country.

Joy Quach is the student events and entertainment coordinator and said the exhibit helps students become aware of the diverse cultures on campus.

A University of Minnesota student’s passion for sharing her culture and traditions has brought to life a unique art exhibit at the Coffman Art Gallery.

Rawan AlGahtani approached Student Associations and Activities (SUA) last spring with the idea of ​​bringing some of his home country’s achievements to campus.

The ZEHBAH exhibition, which will run until November 13, features scenic artworks and patterns made and imported by artists living in Saudi Arabia.

“It was truly a learning opportunity to develop the art and culture behind Saudi Arabia,” said Joy Quach, student events and entertainment coordinator. “I had a lot of fun seeing the different arts and learning about the culture by talking with Rawan.”

Quach said the exhibit helped students become aware of the presence and contributions of diverse cultures on campus.

“Going into a predominantly white school, I had this assumption, ‘I don’t know if different cultures like mine or other peoples’ would be represented,” Quach said. “Seeing an art exhibit like this shows me and other students that U cares about diversity and wants to show different cultures and traditions.”

According to the University’s most recent statistics on international student enrollment, 48 Saudi students enrolled in the University in 2019.

“We worked with UMN Extension and one of the professors brought works from Morocco, and we met the leader of Morocco at the opening,” said Tricia Schweitzer, director of arts and archives at SUA. “We also worked with graduate students to organize an exhibition with the College of Design or the Department of Art.”

AlGahtani worked with a guild of artists from Saudi Arabia, who shipped the artworks from Saudi Arabia or reproduced them as prints for display on campus. AlGahtani and Quach also hosted a reception to celebrate the exhibit on September 22, which organizers said was well attended by students.

AlGahtani said he named the exhibit ZEHBAH, which means “gold and wealth” in Arabic, to signal the richness of Saudi culture reflected in the chosen works.

“This exhibition helps to signify the importance of showing Saudi art, culture and traditions,” AlGahtani said.

Sara Alamry, whose art was featured in the exhibition, said her cartoons are inspired by girls from the Asir region of Saudi Arabia who were unable to marry the person of their choice due to the lack of women’s rights in the country.

“I want people to understand and realize the fact that art, in all of its forms and methods, has a history or suffering behind it,” Alamry said in an email to the Minnesota Daily.

The exhibition was well received by students, organizers said.

Quach recalled a student who came across the group installing the artwork in the gallery. The student was curious about the artwork and asked the group if they could take a closer look. For Quach, the encounter showed just how interested students are in looking at art to learn about different cultures.

A notepad placed at the front of the exhibit displayed students’ comments on the exhibit. Some anonymous comments included “Keep doing what you’re doing”, “So amazing and beautiful” and “Inspiring!” »

What will happen to the exhibition after it leaves the Coffman Art Gallery is uncertain. Schweitzer said that depending on the success of the exhibit on campus, she would consider working with AlGahtani to bring it to other galleries.

Making it a traveling exhibit “is definitely something we could consider depending on its popularity and reception,” Schweitzer said.

Check ‘these’ 4 things before buying a house, or regret it – News18 Poll News WAALI