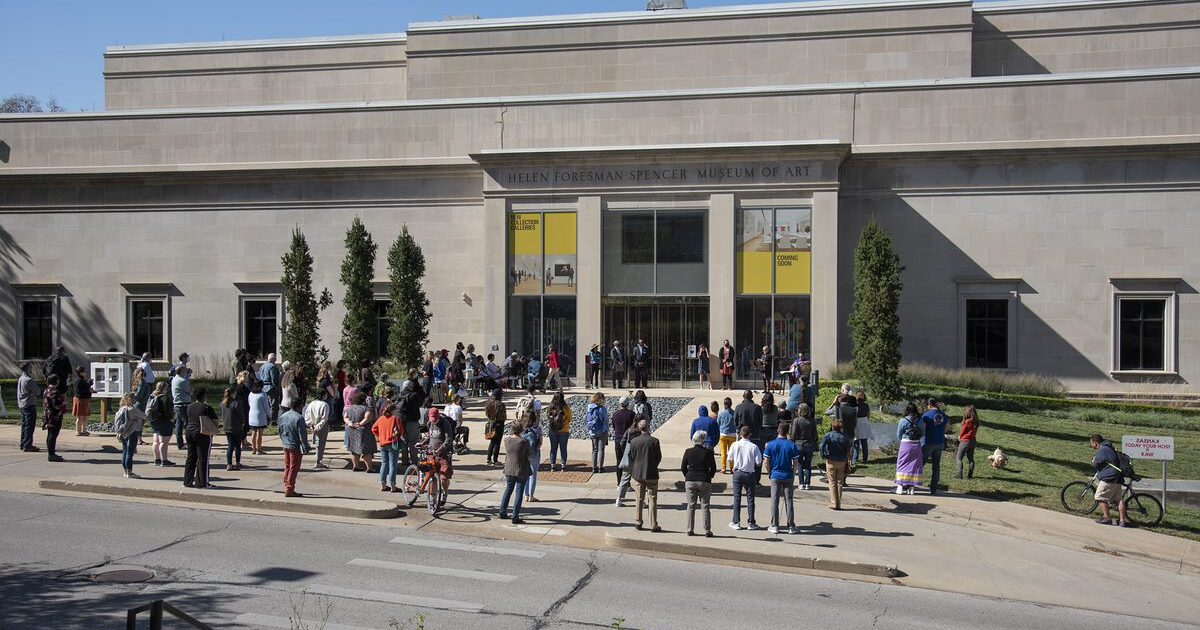 The vandals are still on the run, but the public artwork “Native Hosts”, created by Edgar Heap of Birds, is back in its place, sparking a wave of gratitude.

Last month, one of five Native Hosts panels was stolen and four were damaged. All five were relocated on Wednesday.

“What about signs that invoke such a response from someone that they would like to destroy or desecrate?” asked D’Arlyn Bell, doctoral student and leader of the KU First Nations Students Association. Bell was one of the speakers at the museum’s festive event filled with flutes, vocals and percussion.

According to Bell, a member of the Cherokee Nation, Aboriginal peoples see themselves in the artist’s work “and that is why we took personal offense.”

She added: “And when something is destroyed, we rebuild it, we recreate it, we do it again. And that’s what we do here today.”

The signs include the names of tribes in the area now known as Kansas. They bear the colonial name of Kansas and the names of the area’s first occupants, who belonged to tribes such as Kaw and Kickapoo.

Kansas is spelled backwards – and that’s one of the reasons Robert Warrior says people will review the job.

â€œThe way Edgar (Heap of Birds) describes this is that he says there’s a ‘going back’, it’s an invitation that’s part of these panels,â€ said Warrior, professor of literature and of American Culture at KU and a member of the Osage Nation. “He says you’re going to look behind you to think a little more.”

Hardy said the museum and the university are committed to reinstalling the five panels – with added security.

She added, “The panels represent the creative work of Edgar Heap of Birds and the work of all artists who strive to express their freedoms.”

According to KU Deputy Chief of Public Safety James Druen, the theft case was referred to the Douglas County District Attorney’s Office for “prosecution considerations.”

Investigators have photos of the vandals.

But, said Druen, the vandalism case remains open, and “until someone comes forward and identifies the people in the footage, we’re sort of at a standstill.”

Four Seasons: “Still Here” by artist Doug Graybeal at the artistic base