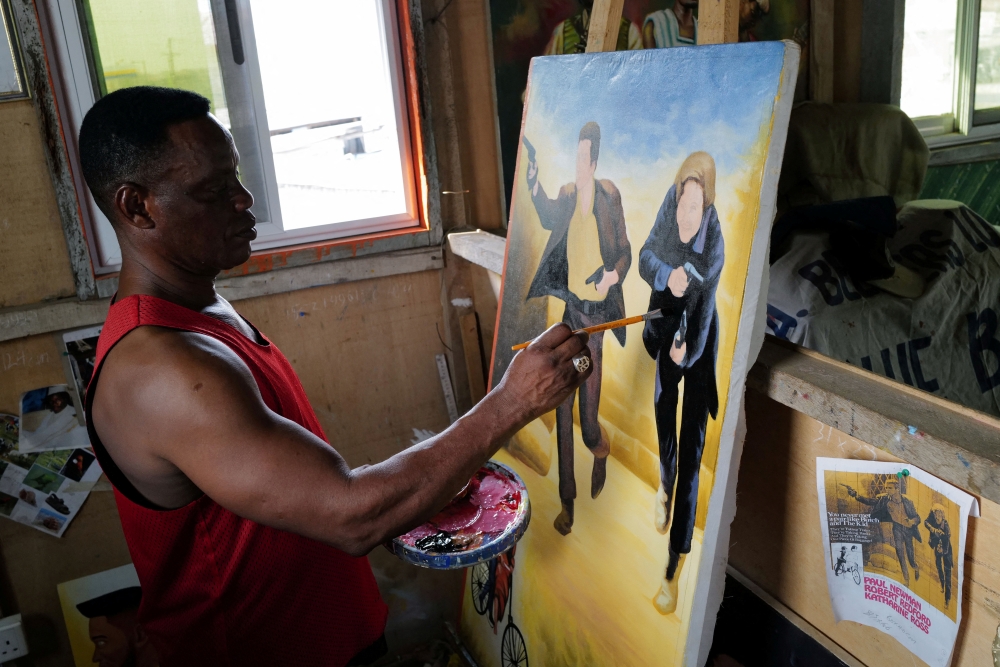 Ghanaian artist Daniel Anum Jasper, 54, works on a movie poster commissioned for an overseas client at his studio in the Teshie area of ​​Accra, Ghana February 11, 2022. REUTERS/Francis Kokoroko

ACCRA: With the stroke of a brush, Ghanaian painter Daniel Anum Jasper armed actor Paul Newman with a pair of guns. Unfinished paintings of a bell-bottomed John Travolta and nunchuck-spinning Bruce Lee adorned the walls of his crowded Accra studio.

Jasper, a seasoned movie poster designer, was finishing one of the 1969 classics “Butch Cassidy and the Sundance Kid,” commissioned by an overseas collector who had reached out on Instagram.

From the late 1970s to the 1990s, Ghana developed a tradition of commercials featuring colorful hand-painted posters. Local cinemas flourished in the West African country, and artists vied to attract the biggest audiences with their often bloody, imaginative and breathtaking presentations.

Jasper pioneered the tradition and has been painting movie posters on recycled flour sacks for 30 years. But the market for her job, which once had people clamoring for theater seats, has changed.

“People are no longer interested in going out to watch a movie when it can be watched from the comfort of their phone,” Jasper said.

“But there is growing interest in owning these hand-painted posters internationally,” he added. “Now they hang them in private salons or show them in exhibitions.”

With the rise of the internet, independent cinemas in Ghana have fallen into oblivion. But Jasper’s work has gained popularity abroad, including in the United States, where the posters are considered unique representations of a specific period of African art.

Western action films were the mainstays of the tradition, as were Bollywood films and Chinese pictures. Many posters include paranormal elements and gratuitous violence even though the movies didn’t have any, and the physical features are wildly exaggerated.

Joseph Oduro-Frimpong, professor of pop culture anthropology at Ashesi University in Ghana, owns several paintings by Jasper. He has been collecting posters for years and is known to have bought the entire supply from a closing video store.

He plans to display his posters at the opening of the Center for African Folk Culture at the university later this year, and said he hopes people appreciate their historical significance.

“Of course there’s aesthetic value to the posters, how crazy it is and all that, but we use them to have a conversation with the students,” he said.

“We tell them not to think about what they see now… (but) to think of these art forms as symbols of history that can tell their own stories.”

Looking for a bike loan? Here’s everything you need to know about eligibility